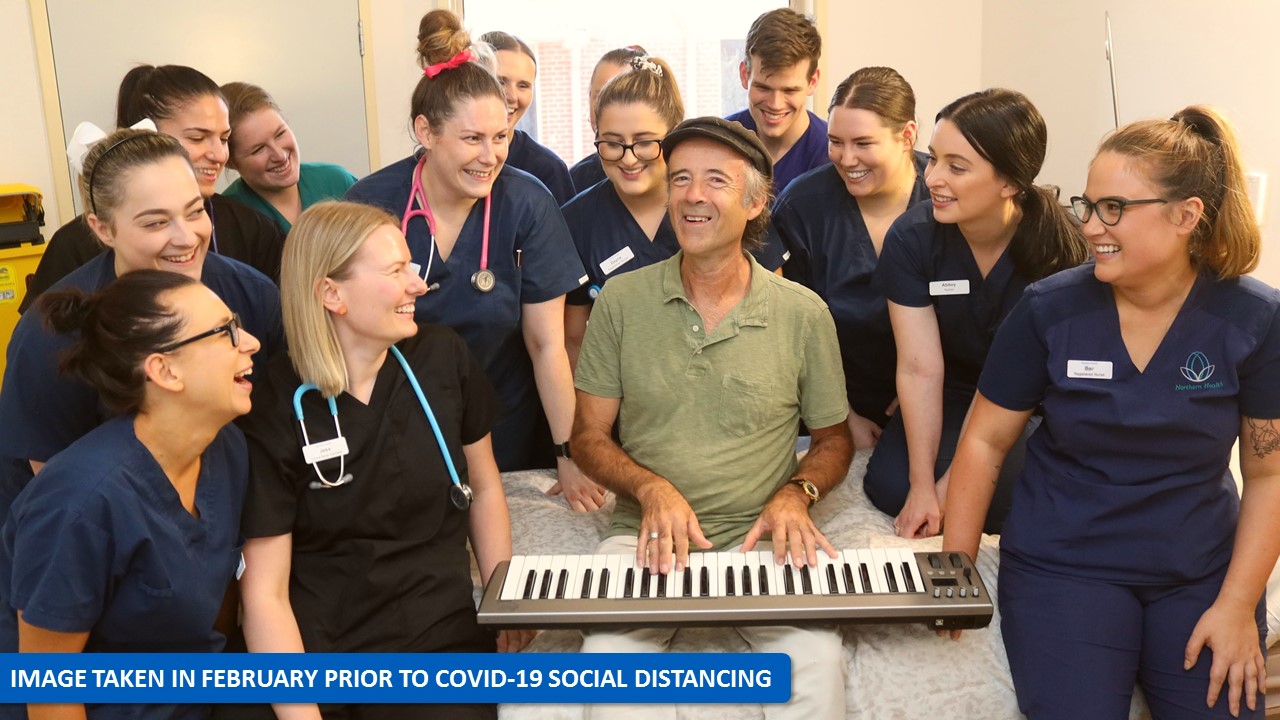 Eltham local, Martin Cox, spent five weeks at Northern Hospital Epping and was so impressed by the amazing care he received that he decided to write a song about his experience.

Martin arrived at Northern Hospital on 6 December 2019 following a ride-on mower accident where he had badly injured his foot and required surgery.

Throughout his hospital stay, Martin was cared for by many staff members in different departments, but spent the majority of his time on Ward 13.

“When I came into the Emergency Department they were fabulous. They sat there patiently getting all the grass and mud out of my wounds because I had fallen into a dam. I then had an operation to debride the bone and after that they very nicely gave me my own room, as they knew I was going to be in for quite a while. Then all the fun began as they tried to work out what to do,” he said.

“Three teams – plastics, orthopaedics and infectious diseases – were all involved. The first major thing was getting the flap done, so they took a chunk of my hip and put it on my heel, so after that it was just a question of waiting for the heel (for the flap) to see if it’s going to take.”

“Once the blood was going properly, it was just waiting until I was good enough to go home – so I was in for about another three weeks after the operation and then got to go home!”

When asked what inspired him to write a song about Northern Hospital, Martin said, “Just to say thank you to all of them because I was amazed at how professional and wonderful they all were.”

“I didn’t know anything about this hospital before. From where I live, I would normally go to Austin or Box Hill, but they were on bypass at the time so they brought me here. It’s not that much further – and actually it’s easier to get to and easier to park so it worked out well.”

“All of the staff were really good, and really funny – Stephen especially. Julia was really kind. I tried to put everybody’s name in the song but I apologise to the Emergency Department for not putting them in there, because they were great too.”

Martin says he started writing the song while he was still in hospital which proved difficult at times as he tried to keep it a surprise for staff.

“I got sprung a few times by one of the doctors and he asked, what are you singing? and I just said ‘oh just making stuff up’ – it was quite funny.”

Martin tells us he has played all different types of music his whole life. “I used to write songs and now I teach. I teach from home and I used to teach at a school in Fitzroy.”

“I play and teach all woodwind instruments – saxophone, flute, clarinet, oboe and piano – a bit of guitar, bit of drums – all at very different levels,” he says.

“I used to teach in country schools so I ended up learning a lot of different instruments, basically because you’re the only one there. So I play the guitar but not very well – just have a bit of fun with it. My main instrument is piano. So, now I just teach and write songs – silly songs about doctors! Stephen said it’s the best present he’s ever received!”

“Again thanks so much for all you and the others did for me, I was simply amazed at the level of care, professionalism and amazing expertise involved in my treatment.”

Listen below to hear the wonderful ‘Northern Hospital Song’.