Melissa Taylor: Going beyond the call of duty

Home / Melissa Taylor: Going beyond the call of duty 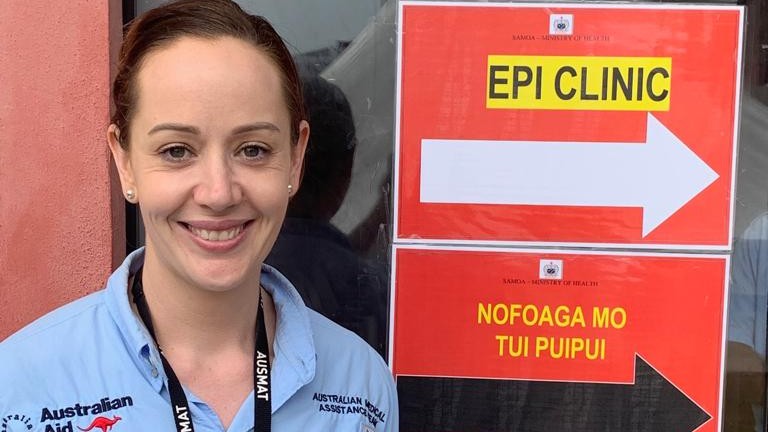 Melissa Taylor (Brunet) is an Associate Nurse Unit Manager in the Birth Suite at Northern Health. She has been with Northern Health since 2005 and her role involves caring for women and their families in labour and birth, supervising and supporting staff in the busy Birthing Suite.

However her commitment to patient care does not stop with Northern Health. Melissa is also a member of the Australian Medical Assistance Team (AUSMAT). The team is drawn from state and territory health services to deploy at short notice. AUSMAT is one of just a few World Health Organisation (WHO) globally-verified Type-2 Emergency Medical Teams in the world.

Melissa recently volunteered to provide support to the Government of Samoa in response to the measles outbreak there. More than 5000 cases of measles have been reported in Samoa with more than 74 confirmed measles-related deaths.

Melissa was deployed with the second rotation of AUSMAT personnel in mid-November 2019. The team worked in the Tupua Tamasese Meaole (TTM) Hospital at Motootu in the Intensive Care Unit and the Paediatric Ward, the Vaccination Clinic, the AUSMAT High Dependency Unit (HDU) facility, the lab, the Health Emergency Operations Centre and an additional 20 bed AUSMAT field ward.

A spokesperson for AUSMAT described the workload as “complex and challenging, with a large caseload of critically ill children admitted to hospital.”

Melissa describes her time in Samoa as one of the most rewarding but also most heartbreaking time in her career.

“During my two weeks working alongside Samoan health care professionals in TTM Hospital, I was privileged to witness a country come together as one and work with enormous passion, pride and love for their community. I was able to work alongside so many incredibly skilled and committed Samoan doctors and nurses, teaching me how to provide high quality care to critically unwell patients in a low resource setting,” said Melissa.

Although she is pleased to be back at the Northern Hospital, Melissa does not hesitate when asked if she was ready to volunteer with AUSMAT again.

“I am always willing and ready to deploy with AUSMAT if called upon. Working within such a supportive and prepared Emergency Medical Team to assist countries in crisis is always a privilege,” Melissa said.

Chief Nursing and Midwifery Officer, Debra Bourne says, “Melissa is a valued member of our Northern Health midwifery team and she is to be congratulated for the extraordinary work she has undertaken with AUSMAT.”