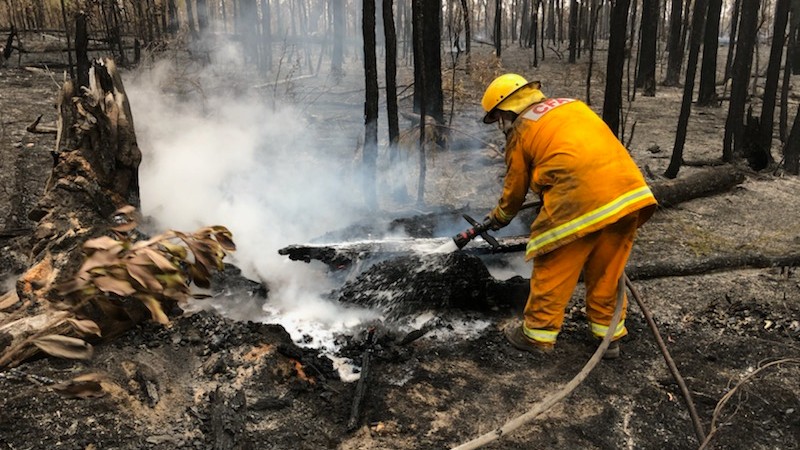 With ongoing bushfires are threatening large areas of our community, this is a challenging time for Australians, and many of us have been, or continue to be affected by the bushfire emergency.

Many of our staff have generously donated their time to help the bushfire communities in the best way they can.

Here are three of their stories.

Jason joined the CFA when he was only 16, initially with the Macedon Fire Brigade. Since then he has held a number of roles, from firefighter to Lieutenant. He has assisted in many incidents ranging from car accidents, aircraft accidents, house fires and bushfires including the Black Saturday Fires in February 2009.

“In nearly 14 years of being a volunteer firefighter, I have attended many incidents. While I haven’t been to the East Gippsland fires in the last few weeks, on New Year’s day I was part of the strike team with my local brigade to put out the grass fire that affected Sunbury. If the call for Gippsland comes to my brigade, I would look into how I can help,” he said.

Jason says every year is a bad fire year, and this year is even more difficult, due to a long period of drought and the limited rain during winter. “Our forests are dry, the simplest of mistakes including not fully extinguishing a campfire can result in a major bushfire”.

“For Victoria, these big fires usually occur in February or March, while this year, they started a lot earlier and the message there is – we still have a long way to go,” Jason said.

“The message from me to staff is to be aware of your surroundings at all times, whether you are doing home visits during working hours in the bushfire prone areas, or you are traveling to and from work every day, even when you are on holidays. Have access to the Vic Emergency App and keep an eye on the weather forecast.”

“Having previously worked in fire recovery sector I know how hard it can be for not just the residents of fire affected areas but the businesses as well. If you’re looking for somewhere to go for your next holiday, once the fires are out and the area is safe, please consider holidaying in these fire affected areas. The businesses need our support to survive, the tourism and farming industries in particular have taken a hard hit this summer season and need our ongoing support to recover,” Jason added.

Anthony is a medical registrar at Northern Health and a medical officer with the Australian Army. He will be deployed to East Gippsland this weekend as part of the health support team to provide help to army members, but also to civilians.

“My team and I can provide things like primary level health care to full resus and emergency management. Our plan is to deploy this Sunday and will stay until required,” he said.

Anthony has been in the army for 18 years, and was deployed last year on another operation. In 2009, he helped with the Black Saturday bushfires as a medical professional. He is committed to helping those affected by the fires using the skills that he has, which keeps him going back to help time and time again.

“Providing support as a part of the larger organisation is the most effective way. In times of national disasters, people usually want to get out and help, but there is always a question where someone can help the best,” he explained.

“I do this because it allows me to help in a way that I wouldn’t be otherwise able to do, and I would like to thank Northern Health for giving me the opportunity not only to work here but also to provide assistance to bushfire communities,” he added.

Tracey Wyllie is a CFA volunteer and she went up to New South Wales as one the strike teams and has spent five days there. She is now in Melbourne, but is being deployed next week to Gippsland.

“I’ve been volunteering for six years and my husband is also a volunteer. This year, the fires started a lot earlier and even Victorian crews were sent off to NSW. Now, we are back to Victoria to fight our own fires,” she said.

Tracey says the fires in previous years were mostly small bursts of fires, while these fires now a bit like a marathon.

“Even Black Saturday was like a sprint, in its intensity and atrocity. It came and created a lot of devastation and then went out really quickly and was contained. The fires this year keep going on and on, and are causing a lot of destruction along the way,” she said.

To help support the bushfire communities and injured animals, Northern Hospital Epping will be holding Fundraising morning tea on Friday, 10 January, for all staff and volunteers.