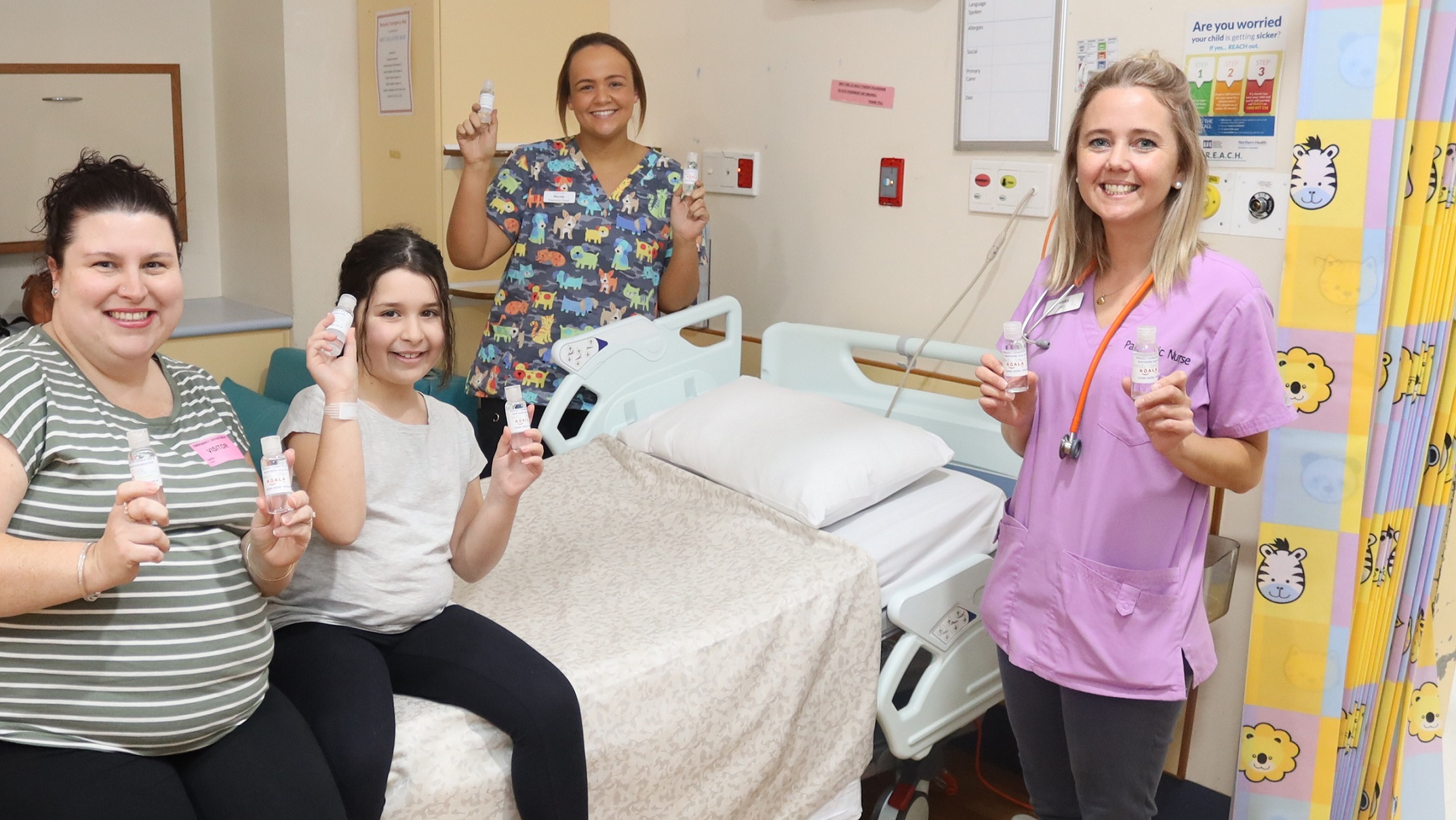 The Children’s Ward at Northern Hospital are grateful for the support they have received recently from Koala Kids Foundation – a volunteer-driven organisation that provides “small things that make a difference to the lives of children and young people.”

“Koala Kids contacted us about a month ago – they are a foundation that traditionally supports children with cancer and their families and the health care team who support them, and they had started reaching out to general paediatric units,” said Courtney Lowry, Children’s Ward Nurse Unit Manager.

Since linking in with Koala Kids, the Children’s Ward has received an abundance of therapeutic and other resources for children, their families and staff.

One of the most significant donations to the ward from Koala Kids was 12L of hand sanitiser.  Courtney contacted Northern Health Foundation to figure out the best way to distribute the sanitiser to patients and families.

“Northern Health Foundation funded the bottles for us and made labels for them, so we are able to give them out to families when they are discharged home – all up we made about 240 bottles. It’s a hard resource at the moment for anyone to get their hands on, so being able to give these to our families, is just an extra little thing we can do for them in these challenging times,” Courtney said.

“Koala Kids also donated a coffee machine to the ward for staff and the families to use, lots of different pantry snacks for the families to enjoy – two minute noodles, spaghetti, tiny teddies and Shapes – snacks that kids particularly like to eat,” Courtney said.

“We had a teenager in overnight recently and she said she was finally hungry after having no appetite due to feeling unwell.  The nurse had so many options from which she could choose, so at midnight she was able to eat noodles, spaghetti and popcorn! Normally the only thing we have to offer in the middle of the night is some toast. So it’s been amazing – overwhelming really!” Courtney added.

Besides the many generous items donated to the ward, Koala Kids also surprise staff with gifts on many occasions.

“We received a box of ANZAC cookies recently with a sign saying – ‘For all the families, doctors and nurses for ANZAC Day’. They also sent two big boxes of chocolate bunnies for Easter, specially for the nursing team,” Courtney said.

“Out of the blue, another package will turn up – like boxes of LEGO, colour in back packs and pencil cases specially drawn by Koala Kids volunteers, an abundance of bubbles……recently it was pizza boxes filled with activities for the kids to make a present for their mums for Mother’s Day!” Courtney added.

“Last week, we had a patient who had her birthday while she was in hospital with us – we were able to grab a bunch of things from the donations from Koala Kids to give to her so we could celebrate her birthday in a small way.”

“It’s the smallest things that can sometimes make the biggest difference. Thank you Koala Kids Foundation and Northern Health Foundation for all of your support of our patients, their families, and our hardworking staff!”

Featured Image: Katrina and daughter Isabella with nurses, Nicole and Aleks with the hand sanitisers